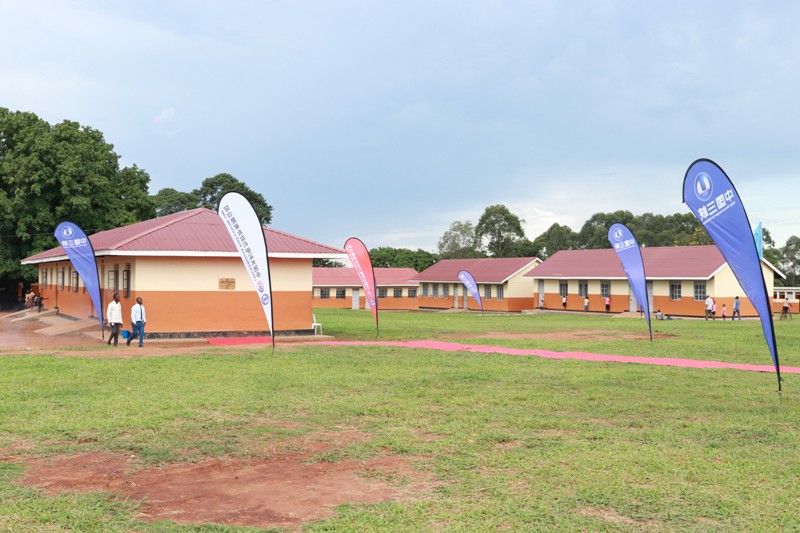 The Isimba Hydro Power Project may have been commissioned over two months ago, but the Contractor China Water and Electric (CWE) is untiring on delivering their promise.

On 28 May 2019, hundreds of locals joined by local and central government dignitaries gathered at Mbulamuti Primary school grounds to witness CWE hand over a fully renovated & furnished structure to the school management team. The renovation and refurbishment works commenced about a year ago, financed by CWE, using mainly local materials and labour.

Rt. Hon. Rebecca Alitwara Kadaga-Speaker of Parliament of Uganda and also Kamuli Woman MP was guest of honour at this handover ceremony, as indeed she was at the groundbreaking ceremony of the same works. Speaker Kadaga was accompanied by Hon. Isaac Musumba-state minister for Lands, Housing and Urban Development also the area MP of Buzaaya County. Uganda Electricity Generation Company Limited UEGCL, Ministry of Energy & Mineral development (MEMD), Artelia-KKATT (owner’s engineer) were in attendance.

In 2017, a heavy wind blew off two classroom blocks while leaving other structures in a precarious state. UEGCL identified this as deserving of Corporate Social Responsibility intervention and implored the Contractor CWE to join in this effort.

In her speech, the Rt. Hon. Rebecca A. Kadaga thanked CWE-the Chinese contractor for giving back to the community. According to the PLE statistics (2017), Kamuli has been named among the worst performing districts in Uganda with only 2.77% passing in division one and 17.84% in division four (4) respectively. Poor performance in Kamuli district among many other factors is attributed to the appalling state of classroom and teachers facilities.

The Rt. Hon. Rebecca Kadaga also challenged the teachers to raise their performance to match the current physical standards the school is at, courtesy of CWE. The speaker also donated scholastic equipment which included a heavy duplex photocopier and printer to support the schools around Buzaaya in printing quality exams.

” We as UEGCL shall support any cause that is purposed to improve the life of communities around the Isimba HPP”, Said, Muhumuza Moses- UEGCL Senior Sociologist, adding that all the community development action plan (CDAP) projects have commenced in Kamuli district.

CDAP is a Government of Uganda (GoU) initiative to mitigate the effects of increased pressure on social amenities caused during the construction of the Isimba hydropower project. Its chief objective is improving the education, health, and hygiene in the project-affected communities of Kamuli & Kayunga districts. The Isimba hydropower plant which was commissioned by the head of state on 21 March 2019 is already pumping electricity on the national grid. Thus, UEGCL through its 5-year strategic plan (2018-23) code-named ” Road map 1300″, UEGCL remains determined to increase its currently installed capacity of 563 MW to 1300 MW come to the end of the year 2023.