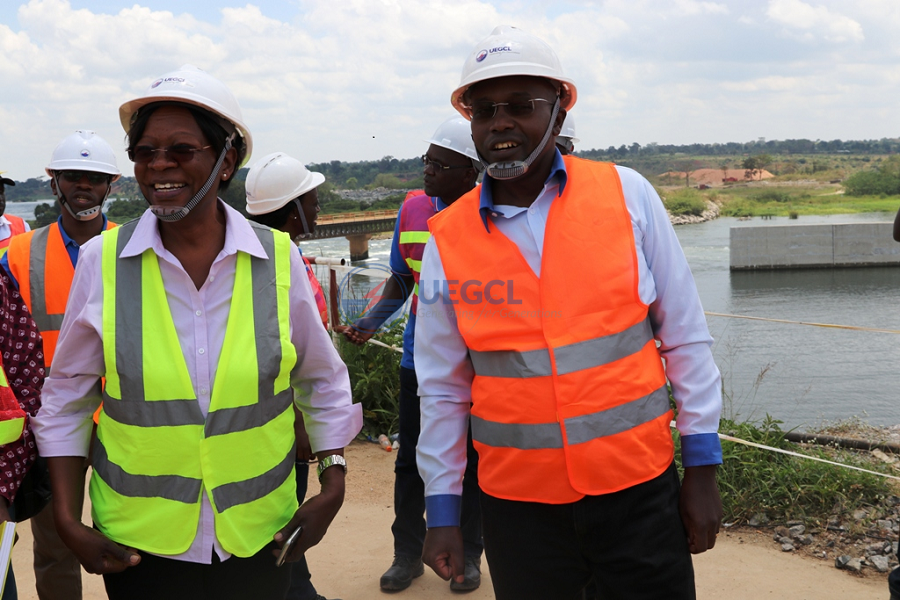 The UEGCL board on Thursday 20 September 2018 concluded its quarterly oversight function at the Isimba (183 MW HPP). Led by its board chairperson Eng. Proscovia Magaret Njuki who was in the company of other three directors namely Mr. Dravu Ronald, Dr. Nixon Kamukama and Ms. Jennifer Katagyira Lubaale arrived the project at exactly 9:00 am. The rest of the three directors were not present due to other government obligations. Also in attendance was Dr. Eng. Harrison E. Mutikanga-UEGCL CEO with four of his top management staff.

The UEGCL board early that morning met with the Isimba HPP consultant Artelia & KKATT and the EPC-contractor China International Water & Electric Corporation (CWE).

In the consultant’s presentation to the UEGCL board, they noted that the project had attained 95% of physical progress. This was broken down in respect to the project’s key installations and consequently the left embankment dam stands at 99%, right embankment dam 95%, Spillway’s: civil works 99%, electromechanical (EM) works 99%; powerhouse: civil works 98% and EM works at 80.3% and finally switch-yard civil works at 96% while EM works stood at 76% as of September 2018.

This was later followed by a guided site tour of the UEGCL board to the project installations ushered by all the project implementing stakeholders.

It is subservient to note that, the Isimba HPP contract was scheduled for 40 month’s ending 30 August 2018. Due to a number of factors like rains that impeded on the timely completion of the right embankment dam (RED) plus delayed land compensation’s. This deadline could not be met by the contractor, hence submitting a request for an extension of time (EOT).

“After an extensive review of the contractor’s EOT by the ministry of energy and UEGCL, the grounds and evidence adduced therein were found reasonable to warrant an extension”, Said, Dr. Harrison E. Mutikanga- UEGCL CEO while addressing the presser, adding that CWE will hand over the project on 31 March 2019.

Dr. Eng. Harrison E. Mutikanga- UEGCL CEO further noted that this contract extension addendum number four is at no cost on the side of the client. He also informed the nation that two out of the four generating units at the Isimba HPP will be ready by December 2018.

“I want to thank Artelia- KKAT for expediting the construction of the RED” Said, Eng. Proscovia Magaret Njuki- UEGCL board chairperson adding that quality assurance measures have been taken by the consultant, for example, they went out of their way to test red & yellow clay samples in Zurich- Switzerland. This was mainly to confirm there dispersivity & permeability before using it in the construction of the dam.

The UEGCL board urged the consultant to immediately review the updated schedule of works submitted by CWE. “It will be very disappointing if after 31 March 2019, the contractor asks for another EOT” Said, Dr. Eng. Harrison E. Mutikanga alluding to the fact that until now there was no updated schedule of works which he said put the project in total jeopardy. The board later that afternoon proceeded to the Nalubaale-Kiira complex.